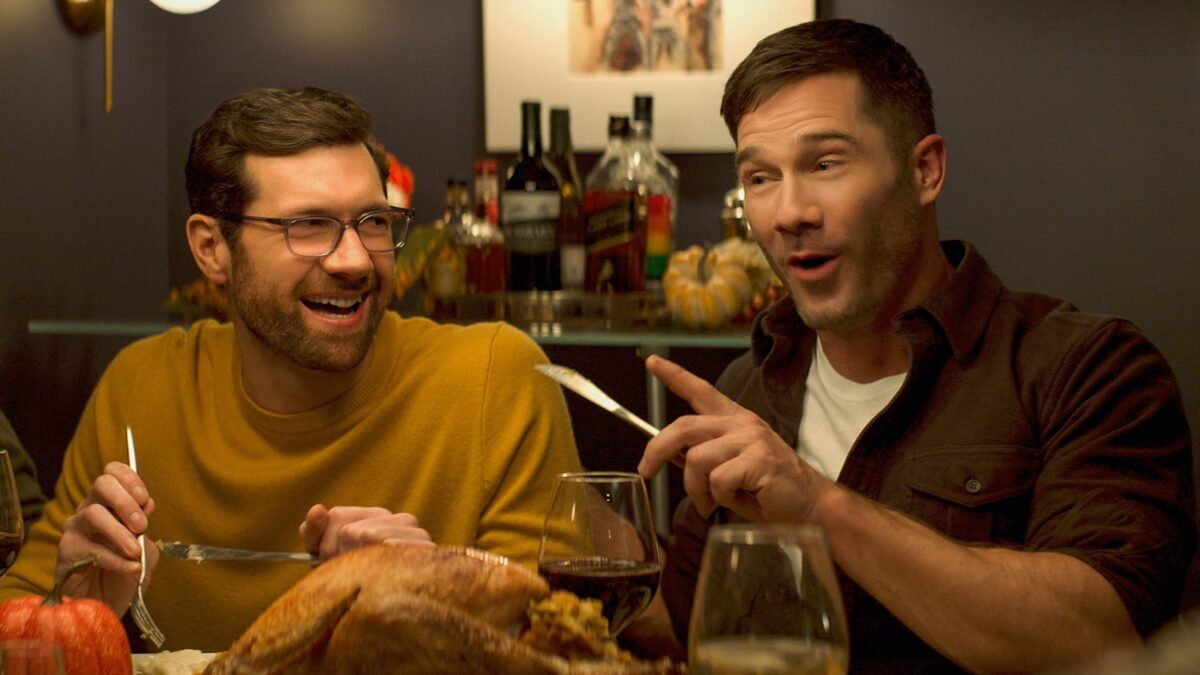 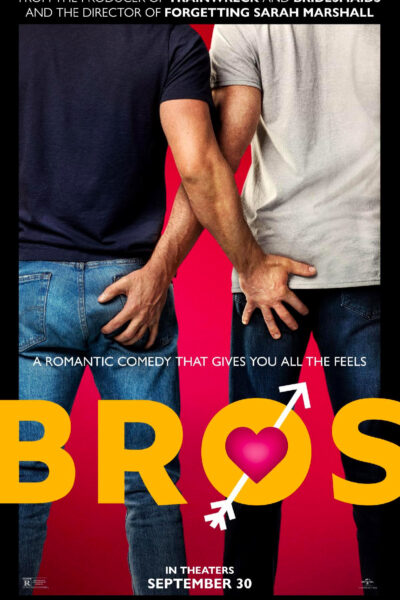 From the ferocious comic mind of Billy Eichner (Billy on the Street, 2019's The Lion King, Difficult People, Impeachment: American Crime Story) and the hitmaking brilliance of filmmakers Nicholas Stoller (the Neighbors films, Forgetting Sarah Marshall) and Judd Apatow (The King of Staten Island, Trainwreck, The Big Sick), comes Bros, a smart, swoony and heartfelt comedy about how hard it is to find another tolerable human being to go through life with. [Universal Pictures]

"A gay cinematic landmark that also happens to be a very smart and funny rom-com."

"For all its relative sexual frankness, this is an old-fashioned popcorn crowd pleaser."

"'Bros' is that rare movie that depicts one of the most precious things in life — the blossoming of emotional intimacy."

"Bros leans into the giddy little revolution of its own existence, inviting the audience into a good, gay time that hasn’t exactly happened, in this way, before."

"'Bros' is a truly funny, smart and well-written romantic comedy about love in all its forms, and that's something we can all use more of in our lives."

"Eichner and Stoller have written a film that plays to both of their strengths as storytellers, all while making one of the funniest and most romantic films of 2022."

"Eichner spins a lot of plates here, crafting a hilarious and heartfelt film that also acknowledges the challenging and often hidden history of queer people in American society."

"It’s big and clever in a way that so few films of this scale are these days, a pleasure to be shepherded through the easy motions of a romantic comedy by people who know what they’re doing for once."

"What follows is an unconventional love story that — although is diverts from and subverts many of the tropes we've grown accustomed to in the genre — feels honest and real for anyone with experience in LGBTQ+ spaces."

"Bros is a genuinely hilarious, wonderful movie: heartfelt, slick and crafted with such careful comedic care that a good deal of jokes will inevitably be drowned out by audiences still laughing over the punchlines that came just before."

"A winning romantic comedy about two men whose emotional intimacy issues may jeopardize the good thing they’ve got going, 'Bros' is frequently funny but also quite touching, spearheaded by the dynamite chemistry between its two costars."

"Eichner’s gay homage to the great American romcoms of yesterday looks and feels exactly like them, and that’s groundbreaking enough. We’ll take that any day over a movie that tries too hard to pander to gay audiences. This one just hears and sees us."

"To be sure, this is a special moment for movies, seeing as how this is a mainstream, theatrical release, R-rated gay rom-com featuring a cast of LGBTQ actors, and of course we should salute that — but for all its forward-thinking casting, cutting-edge references, sexual frankness and cultural awareness, “Bros” should also be celebrated for creating an instant near-classic of the genre, filled with so many of the touchstones we’ve come to expect from romantic comedies and featuring crisp writing and a host of richly layered performances from actors who can handle quick comedy as well as legit drama."