After narrowly escaping a bizarre accident, a troubled teenager is plagued by visions of a man in a large rabbit suit who manipulates him to commit a series of crimes. (R, 113 min.) 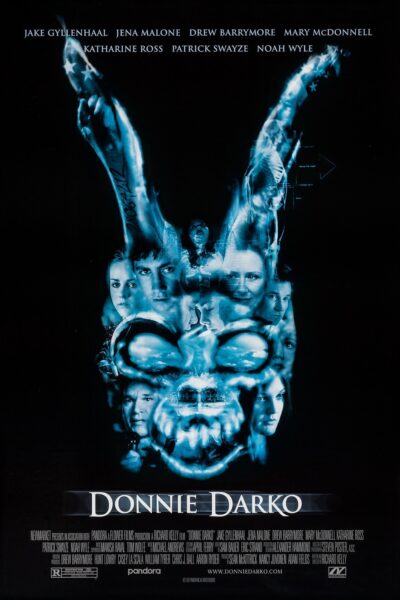 The FilmStubs series is Free and made possible by a grant from Friends of the Library.
For more Springfield-Greene County Library events click here.
There will be a discussion following the film.
Tickets will be available the day of the screening at concessions.

Before STRANGER THINGS combined science fiction, Spielberg-ian thrills, and 1980s nostalgia to much acclaim, Richard Kelly set the high-water mark with this debut feature. Initially beset with distribution problems, it would slowly find its audience and emerge as arguably the first cult classic of the new millennium. Described by its director as ''THE CATCHER IN THE RYE as told by Philip K. Dick'," DONNIE DARKO stars Jake and Maggie Gyllenhaal, Patrick Swayze, Drew Barrymore, Mary McDonnell, Katharine Ross, and Noah Wyle.
[American Genre Film Archive] Restoration courtesy of Arrow Films and the American Genre Film Archive

"It is funny, sad and beautiful"

"Donnie Darko rightly made a star of Gyllenhaal."

"A mini-masterpiece that marks the arrival of brave new talents in Gyllenhaal and Kelly. Cult glory beckons."

"Like gathering storm clouds, Donnie Darko creates an atmosphere of eerie calm and mounting menace -- stands as one of the most exceptional movies of 2001."

"An unnerving, electrifying debut film from 26-year-old writer/director Kelly, one that elucidates the universal traumas of growing up, but does so with a startling uncommonness."

"A stunning technical accomplishment that virtually bursts with noise, ideas and references, but it's fundamentally a gracefully crafted movie that's about human beings and not images."

"Kelly is a supple and courageous storyteller, boldly free-associating as he mixes parody and satire with earnest psychodrama and coming up with plot points no one could anticipate."

"If revisiting an old movie is a bit like going back in time, that sense of disorientation is doubled in DONNIE DARKO . . . A haunted miasma of youthful alienation, suburban malaise, cosmic upheaval, and 1980s pop-cultural infatuation."

"Kelly, the 26-year-old writer-director of this excitingly original indie vision, shares more artistically with Wes Anderson or Paul Thomas Anderson than he does with Spielberg or John Hughes, but the point is, he's out on his own here. He swings big -- with flair."