Aaron Falk returns to his drought-stricken hometown to attend a tragic funeral. But his return opens a decades-old wound - the unsolved death of a teenage girl.
(R, 117 min.) 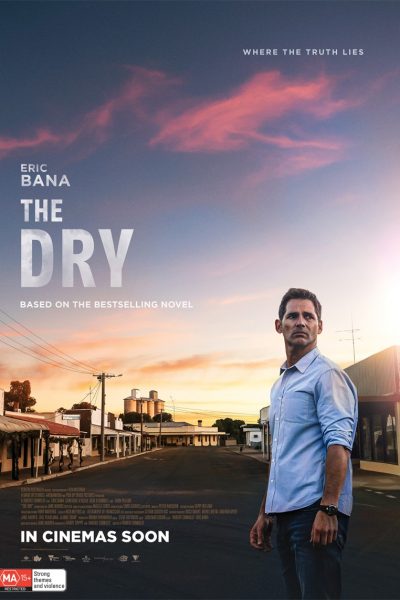 Based on the global bestseller by Jane Harper, a federal agent’s (Eric Bana) homecoming leads to a deeply personal murder investigation that reopens old wounds and threatens to unravel the tight-knit small town. [Metacritic]

"It's a gripping, grisly piece of work."

"Part of the joy of The Dry is watching this excellent cast in action."

"Through it all, the elegance of the filmmaking, the rich detail and the quality of the performances combine to hypnotic effect."

"The Dry is full of memories, suspicions, little rabbit holes of the mind, and at its most gripping, is all the more interesting for it."

"'The Dry' is a thinking-person's thriller, laden with effective symbolism and reflective of the unforgiving terrain on which it is based."

"Its intriguing layers of ambiguity, compelling performances and distinctive setting should spark interest, particularly from audiences hungry for adult drama."

"Director Robert Connolly’s adaptation is a very gripping and polished film, commandingly performed and directed, with an airtight sense of tonal cohesivenes."

"The knotty plotting, along with the strong sense of place, is what makes "The Dry" so compelling. The film was a big hit in its native Australia. It deserves the same success here."

"Bana is excellent as the reluctant outsider —determined, haunted and empathetic — and he’s surrounded by ace character actors. [...] 'The Dry' never feels rushed or undercooked. This is an import that’s worth seeking out."

"[Eric] Bana is rock-solid throughout, able to convey sensitivity and moral probity through a not quite impassive facade — never overdoing it, never underdoing it — and yet fulfilling his duties as the movie’s locus of feeling and meaning. At home in his native country, Bana has never been better."