A radio host from New York City attempts to solve the murder of a girl he hooked up with and travels down south to investigate the circumstances of her death and discover what happened to her.
(R, 107 min.) 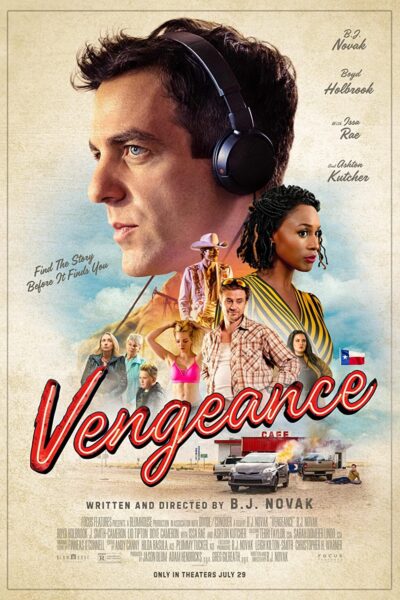 Vengeance, the directorial debut from writer and star B.J. Novak (“The Office”), is a darkly comic thriller about Ben Manalowitz, a journalist and podcaster who travels from New York City to West Texas to investigate the death of a girl he was hooking up with.
[Focus Features]

"This is a movie worth seeing, and listening to its unpredictable insights."

"Novak, who also wrote and directed, makes a bracing, confident debut with this smart and witty neo-noir thriller."

"Vengeance is a refreshing, self-aware take on a man who sets out to define a societal problem and is met with evolving redefinition."

"Vengeance manages to balance its self-effacing and sentimental tones in a way that is extremely satisfying and entertaining to watch."

"Novak crafts a good mystery, consistently engaging and entertaining, and the thoughtful turns of the last confrontation are sly, smart, and knowing."

"It’s a detective story. It’s an insightful commentary on the state of us, which is to say us, the U.S., in this divided, disjointed, distracted age. It’s a comedy, sharp and frequently hilarious."

"Vengeance” asks a lot of complex questions: Is vigilante justice ever justified? Is true crime inherently exploitive? In the long run, do we really exist beyond the record of ourselves that we leave behind?"

"A one-of-a-kind movie that's so wide awake and sharp-edged it marks the arrival of a potentially major filmmaker. In Vengeance, B.J. Novak proves a born storyteller with the rare gift of using a film to say something that intoxicates us."